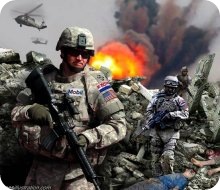 I admit, I’m not all that familiar with the “military operations” conducted by the U.S. and/or other countries. But from what I’ve read and heard, I do have grave misgivings about our (I’m Like A Smart Person) Orange Leader and his declarations about how HE is going to rid the world of “Radical Islamic Terrorists.”

An example (to me) of his inexperienced and reckless actions was his recent decision to deploy hundreds of U.S. marines in Northern Syria. According to this article in The Guardian,  his decision is “high risk foolishness.” It points out that tRump is putting …

It further points out that this …

simplistic idea, promulgated by Trump, that Isis and its warped jihadi ideology can be annihilated by force is foolish and naive.

Trump’s Syrian intervention is “fraught with risk”, Robert Ford, former US ambassador to Damascus, told the Washington Post. “It is a huge policy change.” The potential for military escalation or “mission creep”, if and when US ground troops get into trouble, is obvious, vast and worrying. Northern Syria is a quagmire. Trump just jumped straight in.

Quite frankly, any decisions this man makes related to military actions worries me greatly. His stance related to No. Korea and its nuclear aspirations is another example. And his “friendliness” with Russia is disconcerting as well.

Unfortunately, it is what it is (at least for the time being). I guess all we can hope for is no foreign power ever questions his education, how strong he is, what a winner he is, how tough he is, his tremendous successes, how amazing he is, what a terrific job he’s doing, his leadership abilities, or his ability to build classy buildings … (taken from “Donald Trump’s 20 Most Frequently Used Words“). Otherwise, we’d better duck and cover and hope we live to see another day.

The title says it all.

“…I did not have communications with the Russians.”- Attorney General Jeff Sessions during his confirmation hearings

I got to be honest, this Trump, Trump associates, Trump cabinet picks, Putin, Russian thing is beginning to make me a little nervous. First there were questions about Trumps one-time campaign chair Paul Manafort. And then Trump’s former campaign foreign policy adviser Carter Page. And then Trump’s former national security adviser Michael Flynn. And now we have a Secretary of State, Rex Tillerson, who the Kremlin awarded the country’s Order of Friendship in 2012. And a Commerce Secretary, Wilbur Ross, who has invested over a billion dollars in the Bank of Cyprus, and served as its vice-chairman. A bank owned by a knownally of Russian President Putin and one that has “reportedly” bailed out our President several times but we won’t and can’t know that because, wait…