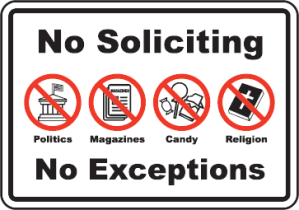 Yesterday evening when I opened the front door in response to the dog’s barking (aka the doorbell), I came face-to-face with two young, well-groomed fellows standing on our front porch. Before either said a word, I politely told them I wasn’t interested in what they were selling. The “lead” individual smiled broadly and said, “Oh, we’re not selling anything.”

I smiled back and politely responded, “Yes, you are. You’re selling religion.”

Somewhat taken aback, but still continuing his shining smile, he countered, “No, we’re not selling anything.”

I reiterated (with my own best smile), “Yes, you are.  You’re selling religion.”

As he shook his head and opened his mouth to again offer his denial, I looked into the eyes of his partner, then back at him, and assured both of them that … “Really. I’m not interested.”

By now, I could tell he knew that I knew why he was there so he thanked me … and apologized for disturbing the dog. 🙂

I never asked, but assumed they were two-by-two Mormons. Nice-looking, well-dressed, polite. But obviously (at least to me) … on their “mission.”

I feel fairly certain that few believers consider it “selling their religion” when they talk to you about their “God.” But what else should it be called? When they want to offer you something (they think) you don’t have and (in their opinion) you need, is this not a form of selling? No money may exchange hands, but if you accept their offer, a (heavenly) transaction has definitely taken place.

What I think is disturbing to many of us is we’re simply not in the market for heavenly goods. We may have owned them in the past but over time, they lost their value so we permanently discarded them. Some simply have never had any desire to make that initial “purchase.” And some discovered the goods were so fraught with blemishes and flaws that they cursed the maker and vowed never again.

It’s an unfortunate truth, but religious salespeople seem to be everywhere you turn. It almost makes one want to start carrying a sign or wearing a badge that says “No Soliciting. No Exceptions.”