You may have noticed (and then again, maybe you didn’t 😉), but I’ve been off-line for the past few days. We experienced an unusual (for this area) snow storm over the past few days. It started Sunday as something light, which is not unusual for the area, but then, it kept coming! We ended up with about 8″ overall. (Yes, I know. It’s nothing like what happens in other parts of the country, but …)

Anyway, we lost power on Monday evening. Lucky for us, this area has natural gas and even luckier, the original owners of this house had installed a gas heating stove in the family room so we were able to stay comparatively warm. Also we had warm water for showers … but boy-of-boy was the bathroom cold!!

To keep some of the more perishable stuff, we put snow into an ice chest. Ordinarily, we would have fired up the generator, but wouldn’t you know it? It wouldn’t start. (That is most definitely something we’re going to correct!)

Naturally, without power, there was no way to go online OR to recharge our phones! Fortunately, we had car chargers so we could keep them at least somewhat operable. But wouldn’t you know it? Phone service was practically nil … one bar or less. *sigh*

Anyway, the power finally came back on last night so life is returning to normal. But we learned a few things from this experience. Even though my other-half has lived by the Boy Scout motto (Be Prepared) for many years, there were a few things we will need to look into for future reference. Especially since we live in an area (West Coast) that could be massively affected by a major (9+) earthquake.

I suppose if I were a believer, I’d be thanking some invisible being right now. As it is, I just accept this whole event as part of “life.” Calamities can and do happen to all of us. How we make it through them (physically and mentally) is up to us. It’s my belief that relying on ourselves and the strengths of other human beings will always be what counts in the long run.

P.S. I categorized this post as “Climate Change” for a reason. I’ll leave it to each of you to agree or disagree with my decision.

In any event, I simply could not pass up sharing the article I just came across in The Guardian. It’s about people who have won “lifetime supplies” of various items.

Some of the winners were delighted with their winnings, but a couple others? Not so much. Anyway, if the opportunity ever comes your way, it would probably be best to discuss how often and how much of your “winnings” will be delivered. It might also be wise to consider your storage room.

Five big winners tell what happens when you hit the jackpot, from free milk for life to a mountain of KFC 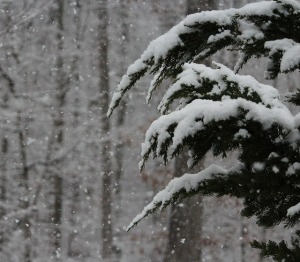 A blogger that I follow has been writing several posts discounting climate change/global warming. According to his sources, we are instead experiencing a Grand Solar Minimum, which would bring on cooler temperatures (ice age) rather than warmer. He notes the recent climate events (unusual snow and cold) on the West Coast, and the (relatively unpublicized) ice accumulation in Greenland and at the South Pole as being counter-intuitive to global warming.

According to NASA, every 11 years or so, sunspots fade away, bringing a period of relative calm known as a “solar minimum.” It’s considered a regular part of the sunspot cycle.

During the late 17th century, an analysis of historic sunspot observations shows the solar activity cycle was interrupted and the sun appeared without sunspots most of the time. The event was called the Maunder Minimum.

According to this article …

The Maunder Minimum falls within the climatically cooler period of the “Little Ice Age”, during which temperatures were particularly low over continents in the Northern hemisphere (especially in winter). It has long been suspected that the low solar activity during the Maunder Minimum was one of the causes of the Little Ice Age, although other factors like a small drop in greenhouse gas concentrations around 1600 and strong volcanic eruptions during that time likely played a role as well.

In one study, it is said that a new Maunder Minimum would lead to a cooling of 0.3°C in the year 2100, depending on assumptions about future emissions. However, physicists believe “a 21st-century Maunder Minimum would only slightly diminish future warming. Moreover, it would be only a temporary effect since all known grand solar minima have only lasted for a few decades.”

(E)ven if one multiplied the solar effects by a huge factor of 5 (which is unrealistic), no absolute cooling would take place (the temperatures would be temporarily cooler than the base scenario, but the trends would still be warming).

As regards the increased ice at the South Pole and its effect on climate change, this article offers some perspective … and addresses the question of how Antarctica can be gaining ice mass in a warming world. (Hint: “More snow accumulation is, counterintuitively, a sign of global warming; more precipitation happens when there is more moisture in the air, and more moisture in the air is a product of higher temperatures.”)

One final word. This blogger also mentions that we’re about to be subjected to the planet flipping its magnetic poles (gasp!). While it is a possibility, this article explains why it’s not something to be concerned about.

Many of you who follow my blog have already purchased and read my book, “Things I Never Learned in Sunday School: Facts about the Christian faith that will surprise and astound you.”

And I appreciate every single one of you!

As I read some of the comments and statements in the blogosphere, it appears there are still many individuals who are relying on hearsay and false teachings related to the Christian faith. Even those who adamantly claim the title of atheist or non-believer occasionally share information that is (to use the vernacular of the day) …”fake news.”

I don’t claim to cover all aspects of Christianity in my book, but I do address — and often discount — many of the more popular beliefs circulated within and without “The Faith.” In fact, I think many people would be “surprised and astounded” to learn there are “holes” in what they have been taught.

Let me be perfectly clear. I do not claim to be an expert. And I’m most certainly no bible scholar. But I did spend several years doing research on many of the teachings of Christianity  and discovered that a considerable amount of what is stated as fact … isn’t.

For anyone interested, I have a blog dedicated entirely to my book — EscapeFromReligion.wordpress.com — where you will find a listing of the contents and also some excerpts. There is also information on where you can purchase various formats. The cost is extremely reasonable for the eBook version and less then $10 (on Amazon) for the paperback.

“Be sure to tell your doctor if …” Whoops! Wrong commercial. 😀

I welcome your comments and questions.

Located in suburban Maryland outside the U.S. capital, a symbolic cross stands to honor 49 men from Maryland’s Prince George’s County that were killed in World War One. The cross was originally erected in 1925 on private land but now stands on public land.

To many, the cross is considered a “War Memorial.” To others, it is a Christian symbol and as such, has become the subject of a religious rights case before the U.S. Supreme Court.

Not unexpectedly, the cross is supported by President Donald Trump’s administration, but also by members of the American Legion veterans’ group who hold “memorial events” at the cross. They (and other veterans) claim the monument has no religious significance, despite being in the shape of a Christian cross. For them, the lawsuit is misguided and painful. One army vet made the comment, “If you don’t want to see it, take another route.”

Lawyers defending the cross say that aside from its shape, the cross has no other religious themes or imagery. There is a barely legible plaque listing the names of the dead at its base, and while ceremonies are held every year at the site, they are not religious in content. Further, they claim such symbols violate the Constitution only when they actively coerce people into practicing religion. (!)

Those that believe the cross is inappropriate say that while they support veterans, the lawsuit is about the symbolism of the cross, not the fact that it honors war dead.

Thus far, one court has allowed the cross, but another reversed this decision and ruled the cross unconstitutional. The Supreme Court will hear appeals.

******************
From my perspective, this “monument” is in a shape widely known and accepted throughout the world as a symbol of Christianity. Individuals who see it and are unaware of its significance as a veteran’s memorial will immediately recognize its religious significance.

If it were not on public land, the lawsuit would most likely be considered frivolous. However, as with other concerns related to religious monuments and structures (that continue to be) erected on public-owned locations, I believe there are valid reasons for this action.

Where do you stand?

The entire article can be found here.