A book is nothing more than an object consisting of pages glued to a cover with a title. Yet within these pages, we often find stories involving mystery, fantasy, suspense, romance, science fiction, etc. We can also learn things from books, such as how to build a computer, how to lose weight, where to go for vacation, what to fix for dinner, even how to stay safe during an earthquake.

But there is ONE book that, for rather curious reasons, tends to stand out from the crowd. It is a very old book; in fact, it was written over two thousand years ago.

It is a somewhat intriguing book in that while it includes stories of torture, murder, baby-killing, slavery and other distasteful activities, it also includes what some consider a “love story” (although one might be hard-pressed to identify the reasons behind this notion).

The book I’m referring to is called the “Holy Bible.”

Eventually, after several hundred years, certain individuals learned to write and the oft-repeated stories were recorded on scrolls made from papyrus (a plant-based paper). As these scrolls were passed around from person to person, it was inevitable they would become worn out and need to be “re-copied,” which undeniably resulted in copying errors.

Further, as the years passed and the world expanded, new and different languages were introduced so dedicated individuals began translating the words into their native language. What is puzzling is that thousands of people in the modern world are convinced the contents of the “Holy Bible” they hold in their hands is totally true to the original versions produced so many thousands of years ago. 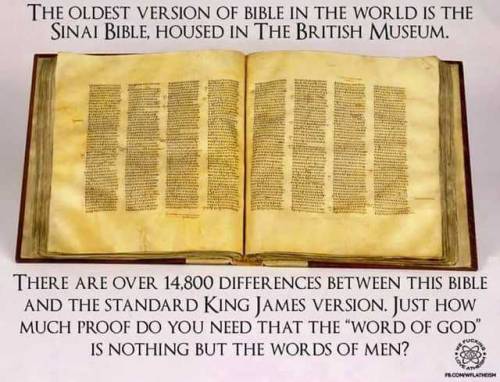 They are further convinced its contents justify/prove/validate their perspective on life and how they should treat their fellow human beings (even though, as mentioned previously, there are numerous stories that support and/or endorse rape, murder, torture, etc.).

From the perspective of many, such dedication and commitment to the contents of a book written in an entirely different day and age by individuals who had absolutely no concept of today’s world and its many and varied innovations … is simply incomprehensible.

I think the following comment by someone on another blog sums it up quite well:

I would imagine that any book that was indeed the inspired word of the supreme being of the entirety of everything (aka GOD) would be the first and last book anyone ever needed. In other words, there should be ONE and only ONE book at the Christian bookstore. Further, the author of such a book (aka GOD) being so awesome, would not need the help of mere mortals to get his (everyone knows that GOD is man, right?) point across.

Yet, as we all know, this is not the case. Do you ever wonder why?

The many wonderful things in my Toy Box