First snow in our new locale … all taken from the front porch. 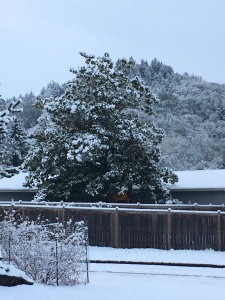 Looking across the street 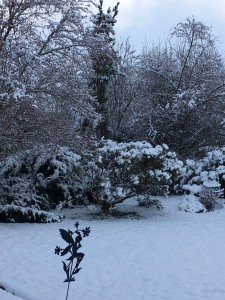 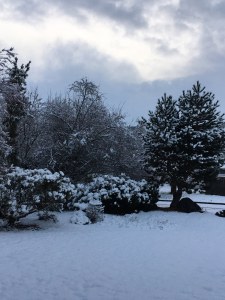 This storm wasn’t anything like what we would often get in our former locale, but who cares? What’s fun is waking up to white on the ground! 😍

On a couple of blogs I visit, there has been extensive discussion on the word “evil” and whether or not it played a role in the recent school shooting.

On one of these blogs, the owner asked where the idea of good or evil comes from. Although I knew the answer he was looking for, I decided to do a little research. Following are some of the things I learned.

For many, the concepts of “good and evil” are essentially moral standards derived from the bible. As one source put it, “… it is His holiness that defines it” (evil). Christian philosopher J. P. Moreland noted that “Evil is a lack of goodness” (i.e., Godliness). Moreover, the bible says God is love (1 John 4:8); thus, one would assume the absence of love in a person is un-God-like — and therefore “evil.” Simply put, to the Christian, the word “evil” is associated with morality and ethics (i.e., whether something is “right” or “wrong”) and this is determined by bible teachings.

Probably the most defining concept of evil is related to the belief in Satan, who many see as the epitome of evil.  Consequently, if we take the word evil literally, it means the work of Satan (or the dEvil). As one source put it, “Those who practice evil are in Satan’s trap and are slaves to sin.”

Some who use the term ‘evil’ are implying that evildoers are “possessed, inhuman, or incorrigible.” This is unfortunate because when the word is misapplied, used perniciously, or used without sensitivity, it can be harmful … even dangerous.

German philosopher Friedrich Nietzsche argued that the concept of evil should be abandoned because it has a negative effect on human potential and vitality and contributes to an unhealthy view of life. Other philosophers feel the concept involves  unwarranted metaphysical commitments to dark spirits and the supernatural.

Interestingly, the word “evil” is not defined the same in every faith:

Hence, the next time someone asks you if a particular act was “evil,” your best response might be … “It depends.” 🙂

One final thought (from the study I reference below):

The problem of evil is the problem of accounting for evil in a world created by an all-powerful, all-knowing, all-good God. It seems that if the creator has these attributes, there would be no evil in the world. But there is evil in the world. Thus, there is reason to believe that an all-powerful, all-knowing, all-good creator does not exist.

“Thank you President Trump for bringing GOD back to the White House after 8 years of Obama banning Christmas and prayer!!!!” – Trump supporter Comfortably Smug tweet 2-19-18 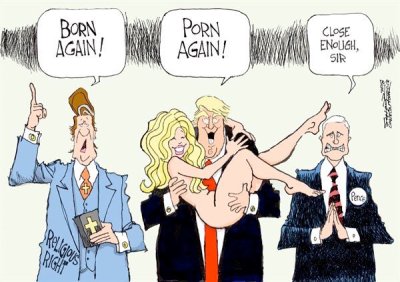 One of my favorite bloggers just posted the above tweet, along with this photo and the following comments credited to our upstanding “leader.” I simply couldn’t resist copying and sharing them. (BTW, I understand a new allegation against him has just been reported.)

Of course if you believe people like Rev. Franklin Graham and other “men of the cloth,” tRump is an upstanding, washed in the blood, pure and undefiled Christian!

Some believe arming teachers will prevent future school shootings. Not everyone agrees, as per the following: 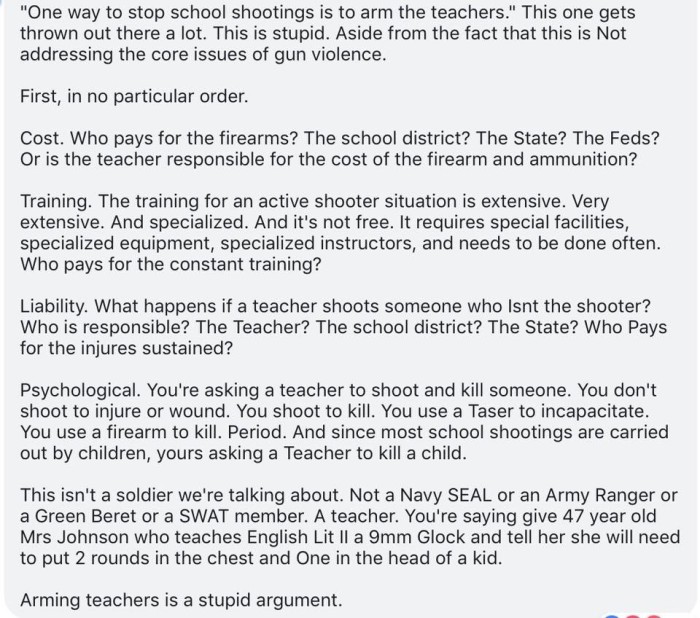